The following, I wrote for my dad.  On September 5th, at 10:54pm, at the young age of 56, he passed away from his battle with lung cancer, 5 months after diagnosis.  I read it at his funeral...which was difficult...but important to me to do for him. 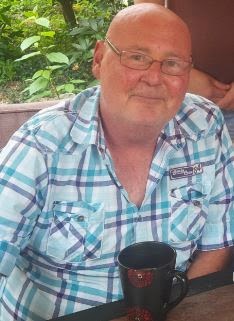 For those that don’t know me, I am Steve Butler’s absolute favourite (and, to be totally transparent, his only) daughter, Kathy Pettit.  This is my husband Peter.


On behalf of my stepmom, Judy, and my brother, Jeff and his wife Angela, and our children we’d like to thank you for coming to celebrate Steve’s life.  Please join us after the service for a reception, where we will be serving some of our dad’s favourite food, so we encourage you to mingle, laugh, eat pizza and share memories with us.  A special shout-out to the Kraus Crew for wearing their funky vests in honour of my dad.  You should all know – no animals were harmed in the making of those vests!


The “Best Ever” Eulogy


Listening to this is going to be very difficult for my dad.  He was a man who hardly ever stopped talking –-- and thought he always had the last word –-- unless it was another Butler in the conversation – and then it became more of a contest of who ran out of hot air first.  It was like his hand was custom built to hold that cordless phone and yak for hours on end.


Like any story worth telling, his included a strong, likeable main character and an interesting cast of misfits who kept him company along the way.  The plot thickened and thinned, not unlike his midsection, though the theme has remained constant throughout.


I’m going to start at the end, because we all know how it ended.


Cancer came from that place called left field.  Not being very sports-savvy, I assume this “left-field” just randomly throws balls, surprises – or even the occasional baby “Kathy” – at unsuspecting individuals.   Like a sudden summer storm, it caught us off guard, and drenched us in tears instead of rain. The news was grim.  The catscan even bleaker.  He did interrupt to ask if they could arrange his treatment schedule around his work as he really didn’t want the cancer to affect his role at Kraus Flooring.  The poor doctor looked quite puzzled,  as most normal people would be relieved to be off work while they fought this ugly disease.  Not dad.  He loved his job and the people at Kraus – and he was a really loyal guy to the end.


Because my dad did such a good job looking after me for all those years, it was now my chance to return the favour. Dad made it simple because his relationship with my husband was such an easy-going and friendly one;  Peter readily agreed to make room for he and Judy in our family home.  They were excited at the prospect – though it was difficult for them to give up their home and most of their possessions.  When dad referred to their new home as “living in our garage” – I repeatedly corrected him with the word “suite.”  I was worried that when he described his new home to people they would think he and Judy were tucked in at night on a workbench, next to winter tires and toboggans.  If you’ve been to our home, you know that’s not the case.


In some ways, it was just like old times – except this time around I didn’t need to borrow his Geo Metro OR persuade him to grant me permission to stay out later than usual!  Peter has often said, if you’re going to have anyone move in with you – Steve would be the guy.  He was so laid back, and unassuming – but you guys already know all of that.  And when Jeff and his family stopped by, it really got silly, like we were all kids again.


Having grandma and grandpa in the house has also been a whole new adventure for our kids.  Like me, they adored my dad’s sense of humour and silliness.  And I get it – and seeing him through their eyes reminded me of my own time with him as a kid.


Growing up, dad was the one I leaned on, cried to, hugged, laughed at - and with, the one I vented to, nagged at, lectured, and occasionally even listened to.  In a time when men weren’t the primary caregivers of their children – he was there.  Solid, warm and reliable (except for that one time he didn’t make it home – and living in the same apartment complex as many other family members, I ran upstairs and told my grandma on him – and boy did he get into big trouble from his mama!).  I remember with great fondness the days of Dad, Jeff and I just sitting around watching old re-runs of Star Trek and debating loudly if The Next Generation was a better rendition of the series, or whether Captain Kirk or Jean-Luc Picard made a better leader  –  we always enjoyed being around each other and I will miss that hilarious banter. Although we didn’t have much growing up in terms of things, we had him – and that was enough.


Steve Butler set the bar incredibly high on what it means to be a good parent.


My dad taught me how to stay positive in difficult situations and how to always make the best of things, and I have yet to meet a more optimistic individual.  It is this attitude that I probably admire the most.  From the moment he was diagnosed, he almost seemed ok with it.  He wasn’t interested in listening to numbers or bad news or statistics.  Dad just chose to live like he normally did, eating the same, cold Chef Boyardee out of the can for breakfast (I’m going to insert here that I would not recommend this for the feint-hearted). Peter and I would often wake up to the smell of bean and beef burritos at 6 am, part of his typical Hungryman frozen dinner breakfast (sorry Dad, you couldn’t convince us that they were a suitable substitute for toast and jam). But they were the “best he’s ever had” he would tell us, a claim that Dad kindly made about pretty much any food item that was placed on a plate in front of him.  He’d give that look, and rave about it being the best ever.  Dad would have been the PERFECT inspiration for a Seinfeld character – “The Best Ever Guy.”


And his positive attitude continued even through treatments.  Dad would literally go out shopping right after chemotherapy, or take the kids for a walk on his scooter.  I was forever nagging him to stay home so he wouldn’t get sick – to which he would reply “I’m dying – I’m ok – stop worrying.”  His treatments were just a pause in his day.  He would often announce to us he didn’t feel like he had cancer.  And because of that, he didn’t act like he had it.


Unless it was convenient, of course.


On a warm Saturday morning, he and I took the kids garage-saling in the neighbourhood, he on his scooter, the kids and I walking.  Along the way, we decided to stop by a friend’s house. Into the backyard we went, at 9am, and Jeremy, who had kindly adopted my dad as a friend, offered him a beer.  To which I pointed out, “Dad can’t drink - he’s on too many meds and it’s 9am.”  Dad looked at me squarely and said, “I’ve got cancer.  What’s a beer gonna do – kill me?”


Rarely did we hear my dad complain about treatments or symptoms.  He didn’t feel sorry for himself, he didn’t mope; he simply lived while he could.  I don’t know if I would have that same strength given the circumstances.


My dad actually said to me, and I’m quoting, “I think in some ways the cancer is a blessing.”  I remember looking at him with some annoyance, my brow furrowed, and asked, “How could cancer possibly be a blessing dad?!”  His answer, which was SO my dad, made me realize how silver-lining-dwelling he really was, “Because I get to move in with my daughter and spend time with her family and my grandkids, retire, and also see my son and his family more often.”  I had no response.  What do you say to that?  What do you say to a man who is able to find a blessing, even in his dying?  For once, I was speechless (and Peter can attest that this is a rare and note-worthy event – again – because I am a Butler).


On Friday, my aching heart was quieted by the number of visitors who came to see my dad, or offered their support through phone calls, texts or hugs, meals, flowers or prayers. The outpouring is truly humbling.  I KNOW I am blessed, even admidst the sadness. I have no shouldas, wouldas, or couldas when it comes to my dad.  Only dids.  There was nothing left unsaid between us and that is such a comfort that not everyone is fortunate to have.  And so Jeff, Judy and I walked him as far into his journey into Heaven as we could go, letting go of his hand when we could go no further.


What has reinforced his inherent goodness and likeable nature was the number of calls and visits where I have consoled the individuals offering sympathy.  That was just the kind of guy he was – and what I love most about my dad.  You had to have loved him in order to lose him, and in losing him you realize just how much you loved him.


A.A. Milne once wrote, “How lucky I am to have something that makes saying goodbye so hard.” To all of us here who are full of tears and sorrow, please remember that it is BECAUSE of how much my dad meant us, and for all the JOY that he brought into our hearts --- that we weep. For this we must be thankful.


The people we love never truly leave us.  Dad is just at a different vantage point, now.  And I have to smile, thinking that his grandkids have the goofiest guardian angel watching over them.


I encourage you to smile when you remember Steve, my dad, your husband, your brother,        your uncle, your grampa, your friend – because when he was with us that was what HE did BEST.  Make us smile…

I can't believe it but...my dad made me so proud of his strength...and attitude...and I didn't think it was possible to love him anymore.  But I do.

Tell your family you love them,
Kathy Pettit
Posted by Unknown at 18:12 No comments: