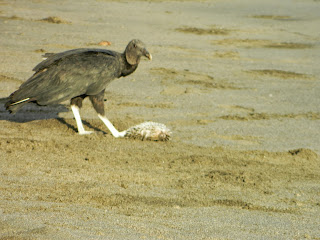 I started thinking about the prickly people in my life - past and present.  I keep a distance, because the alternative is - well - OUCH!  But among the thorns that exist in people, there is an inherent weakness.  You see, like all versions of armour, there is a weak point.  A vulnerability that exists in all of us.  In the beached puffer fish - it was it's death.  In people, it's just being human!  It doesn't end well if you're not nice.  Now, you won't get gobbled up by a vulture (unless of course you take a trip out to a desert with no water...and you pass out from heat...and then die...then you may turn out to be lunch for a very unattractive large bird) but just being yourself will eventually not end well.  The weakness is people will eventually see you for who you really are.  If that version of yourself ain't (yep - I said ain't - whatcha gonna do about it?!) pretty - you're done for!
So here's the thing - if you have the intention of being a good person - DO IT!!  Take action, folks!!  Listen more, let people tell their stories, talk less, share what you have generously, like everyone (or at least try to!), smile at strangers, lend a hand when one is needed, and just be nice.  I don't want any of my readers to end up like that spiky sea creature.  I shudder at the thought!

I can't believe it but...I have puffer fish in my blog!!